Meet The Honorees Of The 2022 Installation Awards 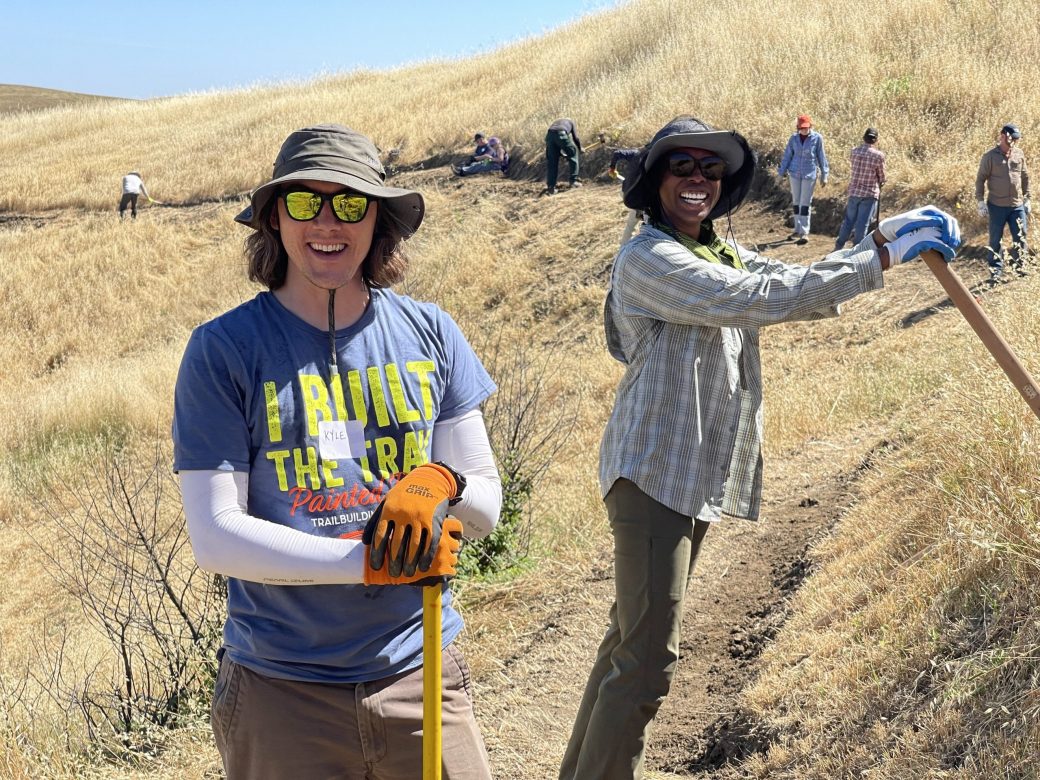 Way before it became part of the John Muir Land Trust, Painted Rock was a symbol of expression and outdoor art perched on the hill overlooking the intersection of Moraga Road and Rheem Boulevard. For decades, intrepid high school students climbed the hill and used the giant rocks there as Mother Nature’s billboard by plastering them with whatever message was apropos for the moment – thus the eventual nickname.

In 2019, thanks to a successful $2 million fundraising effort by JMLT, Painted Rock and the surrounding 84-acre property was saved from developers. Soon, with the help of the town of Moraga, an adjacent 421-acres will turn the combined 505-acres into a park with amazing views, natural wildlife habitats, light recreation and hiking trails.

To that end, JMLT partnered with Volunteers for Outdoor California (V-O-Cal) over the weekend of May 19-22 in order to cut trails into the grassy open hillsides in preparation for the upcoming hiking season. According to V-O-Cal Project Team Lead and JMLT Board Member Eliot Hudson, “Over 70 trail volunteers and over a dozen more volunteers in the supporting base camp, in the course of a single weekend, built over 2,000 feet of trail across Painted Rock’s steep northern slope on a gentle grade that virtually anyone can walk.”

Campolindo High School’s grassy field, situated along Moraga Road, served as base camp for any overnighters who brought tents to spend the evenings. Hearty meals, musical entertainment and showers were made available to the volunteers who braved potential hazards such as sun exposure, dehydration, poison oak, ticks, snakes, and accidents from sharp tool usage.

JMLT Executive Director Linus Eukel was notably impressed with the volunteer workforce stating, “Nearly 70 sweaty volunteers laid out the path, hauled rocks, dug dirt, removed plants, leveled out bumps and turns, and smoothed the ground for a delightful half mile of new trail that takes visitors from the top of Painted Rock in Moraga northerly to hundreds of adjacent acres that will open to the public in the near future.”

Organizing the weekend event took months of planning by the V-O-Cal team. A truck full of tools, a field kitchen, radios, medical kits, sun showers and anything else necessary to support the large team of volunteers over the weekend were on hand, not to mention experienced staff members and rangers.

“The dedication of everyone who works so hard and contributes so generously absolutely humbles me every time there is a project,” stated Hudson. “And, it makes me so enormously proud of them all.”

“I worked on Sunday, so I had a chance to walk along all the trail that had been built on Saturday, which felt and looked great,” recalled Moraga resident and volunteer Ellen Beans. “I was working unit No. 12, which was assigned to a 100-yard or so stretch to apply some smoothing out strokes with our Polaski tools. When this was done to the satisfaction of our crew leader, we walked to the head of all the working trail crews to begin another section of cutting out the trail.”

Beans was disappointed that she didn’t recognize any Moraga residents during her Sunday shift, but was impressed to learn that volunteers came from all over the Bay Area (San Jose, Fremont, Santa Rosa) to help out. “I hope that during these summer months that many Lamorinda residents will hike up there to enjoy the incredible views that this new gently sloping trail will facilitate.”

For additional information contact: linus@nulljmlt.org or phone Linus Eukel at (925) 228-1130.