DRONEVIEW7: A moment of zen over Fernandez Ranch in Contra Costa County

The executive director of the John Muir Land Trust traded a music career for land conservation, but he still performs with passion. 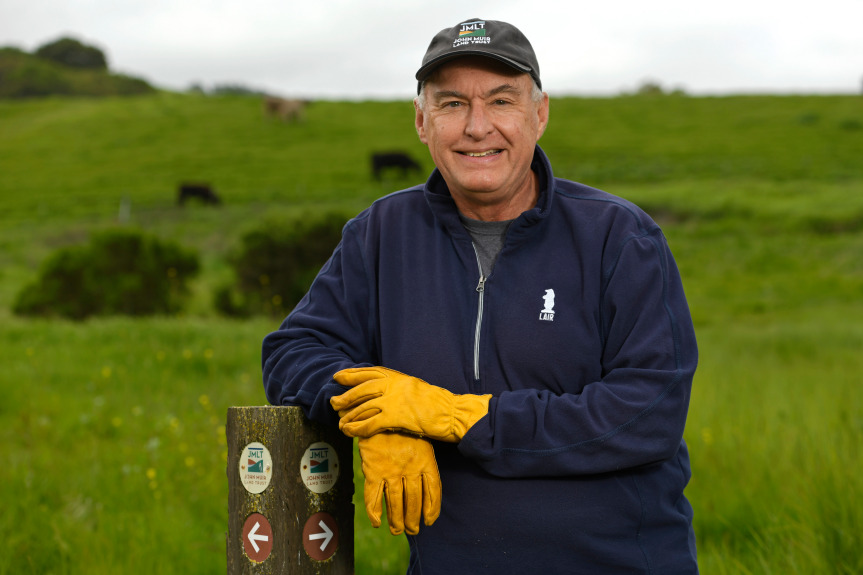 For Linus Eukel, the move from opera singer to executive director of the John Muir Land Trust was a natural and logical one, even if it leaves everyone else shaking their heads in puzzlement.

Both careers involve focus, passion and a single-minded purpose bordering on the obsessive.

“With music,” says Eukel, who has headed the Martinez-based John Muir Land Trust for the past 15 years, “you’ve got to be ready to do your best work at all times, any time you’re called on. It’s a self-involved sort of pursuit. So is the protection of nature, to follow in the footsteps of passionate people who have done so for many years.”

The 30-year-old land trust describes itself as serving “the human and non-human residents” of Alameda and Contra Costa counties “by conserving land that supports the health and well-being of all.”

The organization began around a kitchen table when a group of concerned neighbors came together to look for ways to preserve open space, protect it from development and make it available for everyone to enjoy forever.

The founders of the land trust used the East Bay Park District as a model, and drew inspiration from a former Martinez resident: naturalist and Sierra Club founder John Muir, who led millions to appreciate not only the beauty in nature, but the importance of protecting natural resources and wildlife.

The trust’s first save was the Stonehurst property, 150 acres of pastoral land in Alhambra Valley that had been approved for development. The next project was to get rights to Mount Wanda, named for Muir’s daughter, and its surrounding 325 acres, which were added to the John Muir National Historic Site.

More recent wins include West Hills Farm in 2015, Carr Ranch in 2016 and the soon-to-open Almond Ranch.

Eukel, 63, was born in Walnut Creek, but his music career took him across the country, performing with various opera companies. In 2005, he and his wife moved back to the Bay Area, deciding it was time to settle down and start their own family. Eukel ended up working for the land trust doing outreach, but soon found himself promoted to acting executive director when the trust’s leader took a leave of absence.

The door was left open for her return, but when she decided to turn her interests elsewhere, Eukel was given the job.

We talked to Eukel about land preservation and legacies.

Q: Why is an organization such as the John Muir Land Trust so important?

A: From our perspective, the connection to nature is important to all of us. We serve as a vehicle, an instrument for all those passionate people who work so hard to preserve those lands in perpetuity.

That connection to nature and wildlife is easy to take for granted. We forget to appreciate what we have. But think about it. This area is growing and in the future, we’re going to add a population something the size of San Francisco to Contra Costa and Alameda counties. With all those people, we’re going to need more housing, more jobs, more transportation.

We need to protect the open space and ensure that we have nature nearby that is easily accessible. It’s tremendously important for our well-being, but also to ensure clean air and clean water. Without natural resources, the system breaks down.

Q: Why are you so passionate about conservation and preservation?

A: I came from a background of pursuit — pursuing goals at the expense of everything else.

I think, in looking back, that I’ve sometimes lacked composure and life balance. But when I look at all the work that has gone on before us, and all that will go on ahead of us, it’s easy to get wrapped up in that passion and drive.

A: That legacy is an investment that is paying off now, and it will pay off in the future. The trust made sure people have a place to go to be in nature. It’s especially important now, with the shelter-in-place, and people can use that space as long as they experience it correctly and safely.

We have a lot of new users. People are calling and asking if they can take a walk. That’s right now, but it’s going to be that way forever. The trust has made sure those natural resources don’t get used up. And we’ll keep doing that until all the open space is preserved and we don’t have any more to save.

Q: What do you want your legacy to be?

A: I don’t really think about my own legacy. The work should speak for itself. I feel a part of the continuity of time. Look at what others have done, what John Muir did 100 years ago. It’s our turn to do (that) for the next generation.

Every generation is part of the land trust, and they accept the baton and carry on. If anything, I feel a legacy of gratitude. We’re paying it back and paying it forward. It’s a cycle of perpetuity that makes me feel kind of small.

I think as long as the work is accomplished and it progresses, the best thing people could remember about me is that I didn’t drop the ball. I’m much more concerned that I be remembered as a good husband, a good father and a good citizen.

Work history: 15 years with the land trust; preceded by an opera career performing with, among others, the San Francisco Opera, Cincinnati Opera, New York Symphony and the Cabrillo Festival.

Family: Married to Stephanie, with one daughter, Olivia