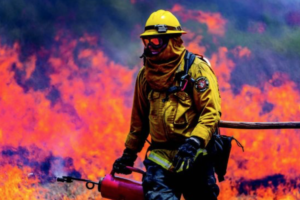 Still frightened by the 2018 grass fire near Buckingham Drive, Moraga residents questioned the timing and the safety of a controlled burn conducted by the Moraga-Orinda Fire District on property recently purchased in the town by the John Muir Land Trust.

As residents complained on social media about a controlled fire going out of control, MOFD was pulling together a 30-person team from its district, the Berkeley Fire Department, the East Bay Regional Park District and the Concord Federal Fire Department to conduct a controlled burn and training exercise along the eastern slope of Painted Rock. The trust requested that MOFD conduct the exercise as a safety precaution, and the prescribed burn was set for June 29. "We heard a lot from homeowners in the area that fire was a real concern. So we wanted to make sure we got off on the right foot," said Glen Lewis of JMLT.